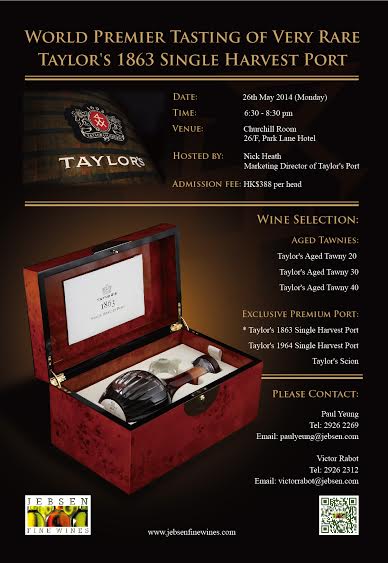 Taylor Fladgate & Yeatman is one of the original founding Port houses, established over three centuries ago in 1692. The firm is best known for its elegant and long lasting Vintage Ports which are among the world’s most sought after and collectible wines.

Taylor’s is also recognised as the leading producer of Aged Tawny and possesses one of the most extensive reserves of cask aged Port of any shipper. Over the years, using its expertise as an Aged Tawny producer, Taylor’s has added to these reserves by seeking out and acquiring some remarkable parcels of very old wood aged Port, including some rare and valuable wines from the 19th century.

Traditionally these very old Ports, concentrated by decades of ageing in wood, were used in tiny proportions to enrich the Taylor’s 40 Year Old Tawny blend. Four years ago, however, the firm acquired Scion, a very rare pre-Phylloxera Port in perfect condition. Given its historical significance, it was decided that the wine should not be blended but offered as a unique limited edition, the first Port of its kind to be released in this way. The success of Scion revealed, and indeed largely created, a strong global interest in rare single wood-aged Ports.

To meet the continuing demand, Taylor’s has decided to release another rare Port from its collection, a Single Harvest Port from 1863. Regarded as the last great Port harvest before the spread of Phylloxera throughout the Douro Valley, 1863 produced wines of great longevity.

Taylor’s Managing Director commented: “This remarkable Port is like a time capsule, offering a fascinating glimpse into a distant past.” He added: “The 1863 has been in wood for over a century-and-a-half and is a piece of wine history. Thanks to the perfect ageing environment of the lodges in Oporto it is perfectly balanced and shows an extraordinary vitality.”

The historic Port lodges of Oporto, like the wine vaults of the City of London or the quays of Bordeaux, provide ideal conditions for the storage and ageing of wine. These vast dark warehouses, with their thick granite walls and high ceilings, are kept cool and damp by the humid winds blowing off the cold waters of the Atlantic and proximity to the River Douro.

The Taylor’s 1863 Single Harvest Tawny will be offered in a specially-made crystal decanter presented in a superb wooden presentation box with a maple burl veneer. Each box contains a certificate personally signed by Taylor’s Managing Director, Adrian Bridge.